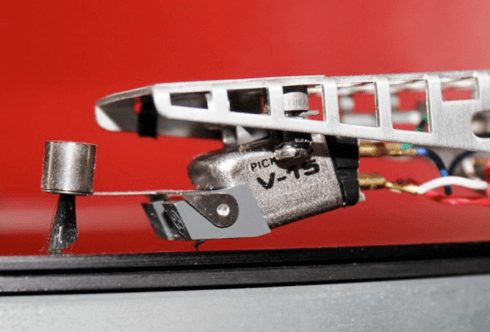 In due time, the standards of essential dimensions of heads to the players were adopted.

Mounting screws by standard can have threads M 2.5 and M 2.6. But, as well as in the case with the recording and playback curves RIAA, manufacturers of heads ignore the standards. For example: the length of the needle holder (size 9.5 in the diagram) ranges from 4 to 14 mm! There is no need even to open up a subject about the other «standard» size of heads. Taking into account the above violations, heads mounting to the holder platform, in majority cases, is quite complicated procedure. And when you keep in mind that the holder has long (considering that there are different lengths of needle holders) and wide slots (for different mounting screws’ diameter), the head assemblage is a long and complicated process, during which it is necessary to consider the interaction of several parameters. For example: exposing a correction angle in compliance with a pattern, you need to consider a possible change of the effective length of the tonearm (the distance from the vertical axis of the arm leg rotation to the tip of the needle).

Manufacturers of tonearms are also trying to keep abreast of holders diversity of manufacturers of heads. From huge perforated to subminiature, from those, were made with the arm tube together to those having multiple spatial intermediate fasteners. But there are also systems of heads self-aligning.

And that’s fine, but here discrepancies of production must be added. Under the head platforms by themselves or with respect to the main axes of rotation in most cases are rather wry. This defect is particularly inherent in tonearms with fixed holders, i.e. made with the arm tube together. Among these, quite expensive, tonearms there was one with a flatness of 1.2 mm! So they had to bond a plate of hardened paper and smooth the platform flatness both according to the horizontal axis of rotation, and respectively to the tube axis of the tonearm. Speaking about older bayonet systems of heads mounting (when the head is attached to the holder, and then all together with the bayonet clamp and additional contact platform of tonearm wires are attached to the tonearm tube) there are even more problems with its setting. However, recent interest in such method of attachment slightly increased due to the start of manufacturing holders of wood.

There are also other methods to attach the holder to the tonearm tube. The given below picture presents one of the best tonearms from Simon Yorke (CD player from this manufacturer is installed in the library of USA Congress).

And now a bit of theory. Reducing the moment of inertia of the tonearm (ml*2) effects favorably on its work. But additional systems of head positioning setting and adjustment (pass pad, mounting screws, connectors, etc.), located at the axis of rotation further tube end of the tonearm, greatly increase the moment of inertia, thereby negatively affecting the operation of the tonearm. Work stability of the system due to the large number of terminals and connectors is not also improving. That’s why, preference should be given to quality tonearm manufactured with a minimum of setup (adjusting) nodes. Only DJ tonearms do not require any settings. For this period of time it was invented lots of suspension systems of tonearms: Singly and driveline, on «knives» and flat springs, on threads, etc. And if you have a look at the Internet pages patent on the, then the variety is impressive.

Currently, there are two leaders: a gimbal system and single support one. Gimbal suspension system is well-established, both theoretically and practically. Earlier it was made on the axes of sapphires, borrowed from the watch and instrument industry, and then on the axes of the balls and cones, in modern times ball bearings are preferred.

Ball bearings have hidden reserve: usually bearing pair after assembly is not rolled off. Although the oscillator movement of the tonearm rarely exceeds 35 degrees, it is better not to neglect the rolling. Why? In the first part (S&V № 2/2011) it has already been described the way of tonearm work. The problem is in the tiny elastic element of suspension of a needle holder, clearly visible on the photo.

Because exactly through it the groove moves the entire tonearm! A moment of inertia of the tonearm is enormous relatively to the applied elastic forces. And it’s better not to ignore the additional frictional forces in unrolled parts of suspension. 8 лет ago in Interviews
Social
Gallery